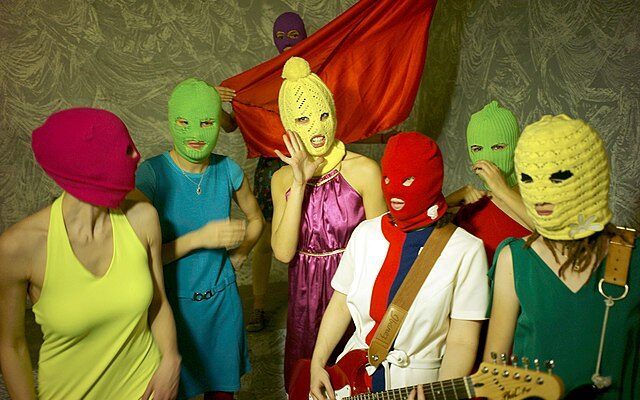 This song is our statement against the war that Putin started in Ukraine.

On 24th February 2022 Russia began a wide scale military attack on Ukraine. Russian bombs and rockets destroyed Ukrainian homes, schools, hospitals, wrecking towns and destroying lives. We believe that Putin’s regime is a terrorist regime, and Putin himself, his officials, generals and propagandists are war criminals.

The chorus is based on the words of a captured Russian conscript soldier who, in a telephone conversation with his mother, said “Mom, there are no Nazis here, don’t watch TV.” Russian propaganda daily poisons the hearts of people with hatred.

Those who oppose Putin are imprisoned, poisoned with military poisons and killed. The tradition of political poisoning for more than 100 years, “laboratory x” – the first laboratory of military poisons created by the NKVD. Opposition figures of anti-government movements became victims of the “experiments”. Putin and the FSB are proud of this “tradition” and continue it: Alexander Litvinenko, Sergei Skripal, Vladimir Kara-Murza, Pyotr Verzilov, Alexei Navalny.

Russia has continued its military aggression on the territory of Ukraine since 2014, when Russian troops annexed Crimea and began the occupation of the Donbass region. Every day since then Ukraine has had to fight for the right to live and for freedom, fight to guarantee its sovereignty.

During all these years, the international community has looked for compromise and conducted business with Russia, at the same time sponsoring Putin’s cruel war. The Kremlin receives billions of Euros from the sale of oil and gas and each day this money converts into Ukrainian blood.

We call for: 1. An EMBARGO on the purchase of Russian oil and gas, on the sale of weapons and police ammunition to Russia. 2. ARREST the western bank accounts and property of Russian officials and oligarchs and introduce personal sanctions against them. 3. An INTERNATIONAL TRIBUNAL to try Vladimir Putin, employees of Russian state propaganda, army officers and everyone who is responsible for the genocide of the Ukrainian nation.