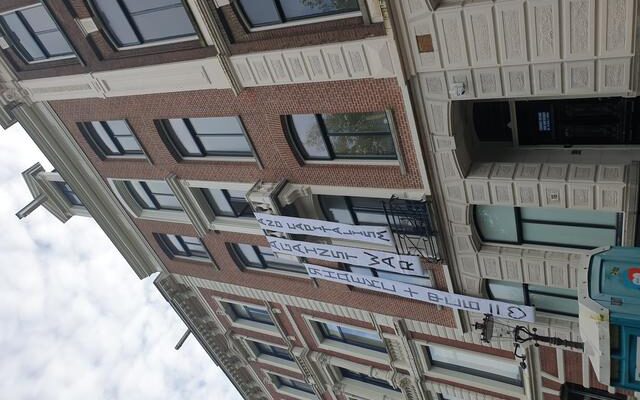 Today we are announcing our new home at Vossiusstraat 16.

We purposefully decided to squat this building, owned by Russian billionaire Arkadiy Volozj. As everyone knows, the Russian army invaded Ukraine this year. This is just the latest in a list of Putin’s crimes, against Ukraine, against LGBT people, in Syria, and many more. With this year’s invasion, the Russian state is finally widely denounced as criminal, genocidal, and as an authoritarian state. Volozj, who founded Russian propaganda site Yandex, has been placed on the sanctions list of the European Union since the invasion, as the EU determined he “is supporting, materially or financially, the Government of the Russian Federation and is responsible for supporting actions or policies which undermine or threaten the territorial integrity, sovereignty and independence of Ukraine.”.

Yet this house was not frozen until a few weeks ago, because it’s owned through a company on the Virgin Islands. The billionaire’s lawyers contacted the government to inform them of his property here, but the government didn’t send it on to the department responsible for sanctions. Clearly, the Dutch state doesn’t see it as a priority to curb billionaires and oligarchs. National sanctions coordinator Stef Blok claimed that the Dutch housing market just isn’t interesting to Russian oligarchs. That’s obviously bullshit.
About 9000 properties in the Netherlands were bought through companies in tax havens. 6000 houses are owned by companies that through shady constructions are untraceable. In total, they own 10.5 billion euros worth of properties. It’s clear: There is no housing shortage, there is an excess of rich people.

The rights of billionaires, who see our cities as investments, are better protected than those of vulnerable people who need a roof over their head. We are people that need a place to live, regular people, because this is what is regular now in the Netherlands: being unhoused, being homeless, being stressed about whether you will be able to live in the city where you study, work, teach, or were born. It seems the only thing that determines whether you belong in this city is whether you have money or not.

We squat this place because we are AGAINST this war, AGAINST the greed of oligarchs and billionaires, AGAINST the parasites that empire creates. Get their money out of our city! If the state evicts this house, they are proving they care more about the wealth of a Russian billionaire than about the people that actually live in this city and contribute to it. We squat this property in support of Ukrainian anarchists and Russian anarchists fighting against their state.